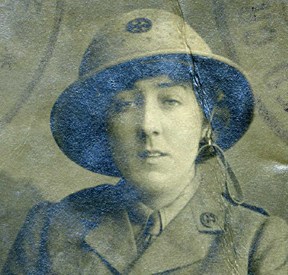 Snowhill, Co Kilkenny is now little more than a place-name on the river, but it once graced a fine Georgian mansion with an extensive farm and demesne and boat house on the river. I previously wrote about the house, which prompted a memory in an older neighbour of mine, Mrs Bridget Power. Bridget recalled as a girl wandering up through the estate to visit her grandfather who ran the mill at Rathpatrick. Passing the house an older lady in a wide brimmed hat used to welcome them as they passed and offered refreshment.
That lady was most probably Violet O’Neill Power, then owner of the Snowhill estate, the last of the family to own the property. Violets upbringing had been far from traditional it seems and from an early age she showed a strong will and a self determined streak.

In 1907 she was one of the first volunteers to join the FANY; First Aid Nursing Yeomanry. This unit was formed by Captain Edward Baker as a consequence of the miseries he had witnessed in the Boer War. The unit was trained to operate in war fronts as aid and assistance to wounded troops, but as it was staffed by women it was roundly criticised and at times lampooned, given the times and norms associated with them.

Following the outbreak of WWI Violet was in the first unit to be dispatched to the front, arriving at Lamarack hospital in Calais, France on the 27th October 1914. The training of the unit included nursing, first aid and motor mechanics. Their work included tending wounded soldiers and civilians, transport from the front line to hospital, and transport to convalescence homes. The motor mechanics was obvious, keeping ambulances in working order and on the road.

When they weren’t providing vital services to wounded and injured, they helped boost moral. Violet was one of a performing stage troop called “the Fantasticks”.

On the 23rd August 1918 she received her first commendation for services rendered the Croix de Guerre with silver star. This was followed by the Order de Leopold II, one of only two to be received by the unit.  What makes Violets awards all the more significant, is that she was a volunteer, received no pay, and in fact fund raised to maintain the operation and she supplied at least one vehicle to her unit.
After the war the FANY unit continued to operate on the front, repatriating refugees, providing transport, continuing with nursing and first aid duties as required and assisting the work of the Imperial War Graves Commission. The unit was stood down in 1920.
At this stage it would appear that Violet had returned to Ireland to nurse her ailing mother, Margurite. Her father, Joseph Edward, had predeceased his wife in 1897. She inherited the house thereafter, buying out her half brothers share. And there she tried to get back to normality, or whatever that could be following the war. It would appear that like many other landowners she struggled in the new Ireland, her war record and landed background possibly not helping.

When Bridget would have met her in the 1930s she was in her fifties and trying to maintain an ailing enterprise. Bridget recalled her once bringing her inside the house to view a wasps nest.  Perhaps an indication of the decline in the house. She married a horse breeder from Tipperary in 1945 dividing her time between her home and her husbands. She finally sold Snowhill, perhaps when it was already too late, in 1954. The new owners had it demolished in 1955.

Violet died on March 27th 1965, childless but having seen more of life than most. Its fitting as we commemorate those who went to war in WWI that she is remembered as much as anyone else
I’m indebted to James Doherty for assistance with this piece.  Much of the details were accessed from: McDermott Alice. ‘…Defy(ing) the Tyranny of Precedent’ The life of Violet O’Neill Power, Twice Decorated Irish Great War Nurse.
My Facebook and Twitter pages are more contemporary and reflect not just heritage
and history but the daily happenings in our beautiful harbour:
F https://www.facebook.com/whtidesntales  T https://twitter.com/tidesntales
A new method of warfare in WWI was the use submarines in deploying mines.  Initially the presence of these explosives would only be known when an unfortunate ship stumbled upon them. The mine laying subs commenced with the UC I type in 1914 carrying a payload of 12 mines with a limited range.  This was improved on in 1916 with UC II class subs, considered the most successful.  They had an increased payload of 18 mines, faster speed and an extended reach.

The mines were deployed from underwater.  Each mine dropped to the seabed from a chute.  A dis-solvable plug which reacted with seawater allowed the sub to move away a safe distance before it released a mechanism to allow the mine to float clear of its anchor weight and it rose to a pre-set distance on a cable. The distance was calculated to be always underwater, so invisible, but high enough to strike a ships hull.

To counter the threat ordinary fishing boats and fishermen were recruited under the Royal Navy Minesweeping Reserve. With some basic training they were redeployed to various ports and waterways.  Many were steel built steam drifters of 2-300 tons and up to 140 foot long.  The skipper and crew were not under naval discipline or expected to wear a uniform.  Their orders came from the Navy.

The method used initially was crude and risky. Two ships with a sunken cable strung between them scoured the channels in order to keep them clear for shipping. The risk was that ships needed to maintain a steady drag as any deviation might allow a snared mine to travel along the cable and strike one of the towing vessels.  By 1916 the method was improved with a kite system which allowed the cable to be steadier, and to ensure that any travelling mines exploded some distance from the ships. Serrated cables were also introduced, but these tended to be only effective with more powerful ships.

There was two techniques for dealing with mines.  They could be towed and if their anchoring cables snapped the mine which floated to the surface could be destroyed by gun fire.  Alternatively the snared mine could be towed into shallow water where it floated onto the surface and could then be dealt with.  Unfortunately steam trawlers for fishing were not built with military purposes in mind, and so unlike naval purpose built vessels with double hulls, they were more susceptible to underwater explosions.

During WWI 726 vessels were employed in mine sweeping and over 250 of them were lost, 214 to mines.  I have not yet come across any details of their operations in Dunmore or the harbour.  But we saw previously how its speculated they may have played a role in luring UC-44 to her doom in Dunmore East.  Two Mine Sweepers that we know of were lost off Dunmore.

The first was HMT Loch Eye, a steam trawler built by the Torry shipbuilders of Aberdeen.  She was built for a local company, the Empire Steam Fishing Company Ltd.  She was requisitioned by the Royal Navy for mine sweeping duties in September 1916.  On April 20th 1917 while operating off Dunmore East she struck a mine and sank with the loss of seven lives.
These were:

NIGHTINGALE, Willie J, Ordinary Seaman
PIRRIE, Robert F 36yrs, Deck Hand
The mine had been laid by UC-33 which was rammed and sank in the following September.  All but one crew of the 28 aboard were killed.
In July another mine-sweeping vessel was lost, the HMT George Milburn.   From what I have read it appears she was on escort duty, en route from Cobh to Milford Haven.  She struck a mine off Dunmore on Thursday July 12th and sank with the loss of 11 lives.

The mine she struck had been laid by UC-42, which was lost in Cork Harbour in September, with the death of all her crew.

The events around Dunmore East in 1917 will be remembered this weekend when The Barony of Gaultier Historical Society (BGHS) under the chairmanship of Michael Farrell will host an event entitled Friend and Foe.  It sets out to shine a light on these events and bring, if you will pardon an obvious pun, more information to the surface.  It starts this evening with a walk at 4pm looking at the life and times of Dunmore harbour 100 years ago.  A full list of events are available on the BGHS blog page.

Much of the information used today was drawn from Jim Crossley’s book The Hidden Threat, The Royal Naval Minesweeping Reserve in WWI . 2011 Pen & Sword Maritme. Barnsley.  Thanks to Frank Murphy for providing me with the book.

I publish a blog each Friday.  If you like this piece or have an interest in the local history or maritime heritage of Waterford harbour and environs you can email me at russianside@gmail.com to receive the blog every week.
My Facebook and Twitter pages are more contemporary and reflect not just heritage
and history but the daily happenings in our beautiful harbour:
F https://www.facebook.com/whtidesntales  T https://twitter.com/tidesntales

This website uses cookies to improve your experience while you navigate through the website. Out of these, the cookies that are categorized as necessary are stored on your browser as they are essential for the working of basic functionalities of the website. We also use third-party cookies that help us analyze and understand how you use this website. These cookies will be stored in your browser only with your consent. You also have the option to opt-out of these cookies. But opting out of some of these cookies may affect your browsing experience.
Necessary Always Enabled

Any cookies that may not be particularly necessary for the website to function and is used specifically to collect user personal data via analytics, ads, other embedded contents are termed as non-necessary cookies. It is mandatory to procure user consent prior to running these cookies on your website.